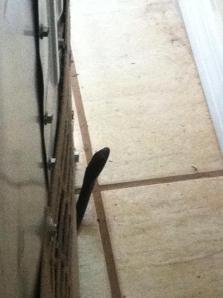 Snake under the Fridge

I learned an important lesson yesterday. Creepy crawly critters move fast and often unnoticed. I was getting some ribs prepared to go into the oven and needed something from the other fridge, the one on the back porch so I opened the slider, got my ingredients, came back in, closed the door and resumed my work in the kitchen. A few minutes later I heard something fall behind the turtle tank. I looked to see what those crazy turtles were doing in there that could possibly cause the extra filter pack to fall behind their tank and saw nothing but two turtles swimming frantically toward the glass. I shrugged it off as a work of gravity and went back to work. Until something moving caught my eye. Right there in the middle of my dining area, slithering across the tile was a long black snake.

I’m not necessarily afraid of snakes. I think they’re pretty nifty from a distance and when you know they’re there but when they appear suddenly, randomly, in places they should never be, the only appropriate reaction is to scream and run and that’s precisely what I did. My fifteen year old daughter was at the computer desk across the room and heard my screaming “it’s a snake!” and she (being terrified of snakes), screamed even louder and ran. My thirteen year old daughter waited a minute, unsure about what could possibly be going on, before emerging from her room and walking outside. Luckily, my six-year-old was already playing outside. So there we were, the whole family on the porch recovering from the shock.

My neighbor heard us screaming and came over with a stick. Neither of our husbands were home. We ended up with two women, four girls under the age of 15 and one 6-year-old boy, in the house on the lookout for the slithery sinister being to emerge from the fortress he chose underneath my refrigerator. He was not coming out. Eventually, I resumed cooking while watching out one eye for him to fly out at my feet at any given moment. I had to get my ribs in the oven!

After about an hour, he came out and another neighbor had arrived and our efforts to shew him out the door ended with him under the stove instead of the fridge. We removed the drawer under the stove and were poking things in there to coax him out and he was so scared he just wouldn’t come. Finally, my Pastor (also my neighbor) showed up and took over. We tried to get him out in a humane way, but the uncooperative little booger met his demise. Pastor, the hero, killed the snake and freed us ladies from the reign of the little tyrant. It was an adventure.

When my husband got home, he mentioned that we should have killed him last week…Last week, he was on our front porch eating a frog. We all looked at him and tried to get pictures of nature in progress (which I would share, but they are terrible). We thought it was kind of cool. Black snakes are generally good to have around since they eat pests so we’ve let him live comfortably and close to our doors without much resistance. Still, my husband said we may have allowed him to get a little too familiar and comfortable with us making it more comfortable for him to sneak in the house.

Either way, it made me think about the little things in my life that I don’t necessarily bother to deal with right away. I think sometimes we see sin lurking at the door and we don’t bother to totally get rid of it because since it’s not inside it doesn’t bother us that much. We may even think it’s kind of cool sitting out there. We may toy with the idea of looking at it and keep peeking out the door to check on it and see where it is. What we don’t realize is that when we allow it access to the close proximity of the door, it can creep in so fast that we never saw it coming until it’s there, stuck and we can’t get it out because it’s weaved into a crevice somewhere where we can’t even see it anymore other than the occasional moments where it rears its little head out from underneath. Maybe even in this, it takes Pastor with a shovel in hand to bash our little creeper in the head before we can grab it by the tail and get it outside.

I often hear people talk of not opening the door for the enemy of our souls to come in. I contend we should take it a step farther and guard the yard. We should be like Joseph and RUN the second temptation comes along. James says “Then, when desire has conceived, it gives birth to sin; and sin, when it is full-grown, brings forth death.” James 1:15. I am determined to not even allow sin to be conceived in my heart instead of waiting until it’s in the house and trying to stop it. It’s much easier that way.